Posted on by
The IMMERSION training concept:
On this training, you’ll do 6 sets, each one will be a five-minute climb with a specific style and a specific set of requirements. This is going to result in endurance gains and a more fluid type of climbing. This workout should take no longer than one hour and a half, including your warmup, your stretching, and the main load. All you need is a pair of climbing shoes and access to the climbing gym. If you don’t have access to a climbing gym, all you need is one climbing panel.
Getting Started with Immersion Training: Intervalic Workout for Endurance.
The way we break this workout into components is 20% warmup, 70% training, and 10% stretching. Let’s get into the meat of the training. You hit the climbing gym, you get ready and put your shoes on, get into a wall and climb 20 free moves, count them in your head. As you move between the holds, make sure you’re climbing very slow, you are doing easy climbing, 20 free movements that you’re going to self-point. Next, you take a three-minute rest and do 20 moves again. This time faster, harder, but not too much. Couple more minutes after, go for a third warmup set, 20 extra moves, count them in your head faster, decrease the size of the holds, and that’s what it is. Now, take a three-minute break, drink some water and here we go into a next routine. Number one, you’re going to climb.
Set#1 – 5:00
Using your timer, stopwatch timer, or your phone, set a five-minute countdown and climb in a vertical wall using long moves on big holds. Start climbing, you might end up doing 40 to 50 moves depending on your speed, but because you’re going slow, you’ll do something between 35 and 40 moves. After youíve finished, take a five-minute rest and then go for a set number two.
Set#2 – 5:00
Step number two is five minutes on the tiled wall. So, I’m talking about 30 degrees of inclination, and in this set what you’re going to do is shorter moves with smaller holds, or include slow person crimps, and make sure the holds are more uncomfortable than in the previous set.
Set #3 – 5:00
Now that you’re getting into to the middle of the workout, youíre going to climb five minutes steep overhang. This is 45 degrees to 60 degrees, or you’re going to go with longer moves, but better holds, so jog, buckets, positive holds, and focus more in your arms instead of your fingers.
Set #4 – 5:00 Now we move to step number four, set number four again, five minutes, keep the same angle, steep 45 degrees. This time you start to mix crimpy moves and shorter steps with richly, longer moves on better holds.
Set #5 – 5:00
This time you’re going to decrease the angle, decrease the halt size as well, so you go smaller, less inclination, and start climbing using this type of configuration.
Set #6 – 5:00
Number six, five minutes, same angle, tiled wall. This time what you do is, increase the size of the holds and make it richly moves.
Just to recap…
We talked about, number one, vertical long moves, number two, 30 degrees short crimpy moves, number three, steep long moves, bigger holds, number four, steep both big and small hauls, number five,we took about 30 degrees moves and also with combining holds and six, keeping that 30-degree intonation, reachy moves, bigger holds.
Regulating Intensity:
Regulate your load. If you’re pumping too fast, take a big hold and shake for 30 seconds, then go ahead. You want to have these peaks of pump followed by a resting position, that sort of the idea, so you don’t fall. If for any reason you fall, get back as soon as possible within 10 seconds. Okay?
Counting Movements…
Something else that you can do is use a piece of paper and count the number of moves you can do within those five minutes on each set, so at the end you’re going to have a list of, at least from one to six, and you’re going to notice which one is the set where you do the maximum amount of movement, meaning which was the set which your speed was the best.
The Pump is what Matters…
Remember, we are not aiming for the speed, we are aiming just to keep a consistent pump, so your body gets used to recovering faster. To stretch, make sure you stretch your fingers, elbows, shoulders at the end of this session, or you can wrap it up. This is incredible training that is incredibly simple to do and to follow. If you want to know more about these programs, go to climbingworkouts.com, download the premium collection, or you can watch the videos in the climbing workouts channel. That is youtube/climbing workouts. You can also check their Facebook pageClimbing Workouts or the Instagram account, Climbing Workout. T
Click here to Download The Premium Collection and get five professional training programs for strength and endurance at a special price — including Essential Training, Progressive Training, along Mastering the Fingerboard and Circuit Training. 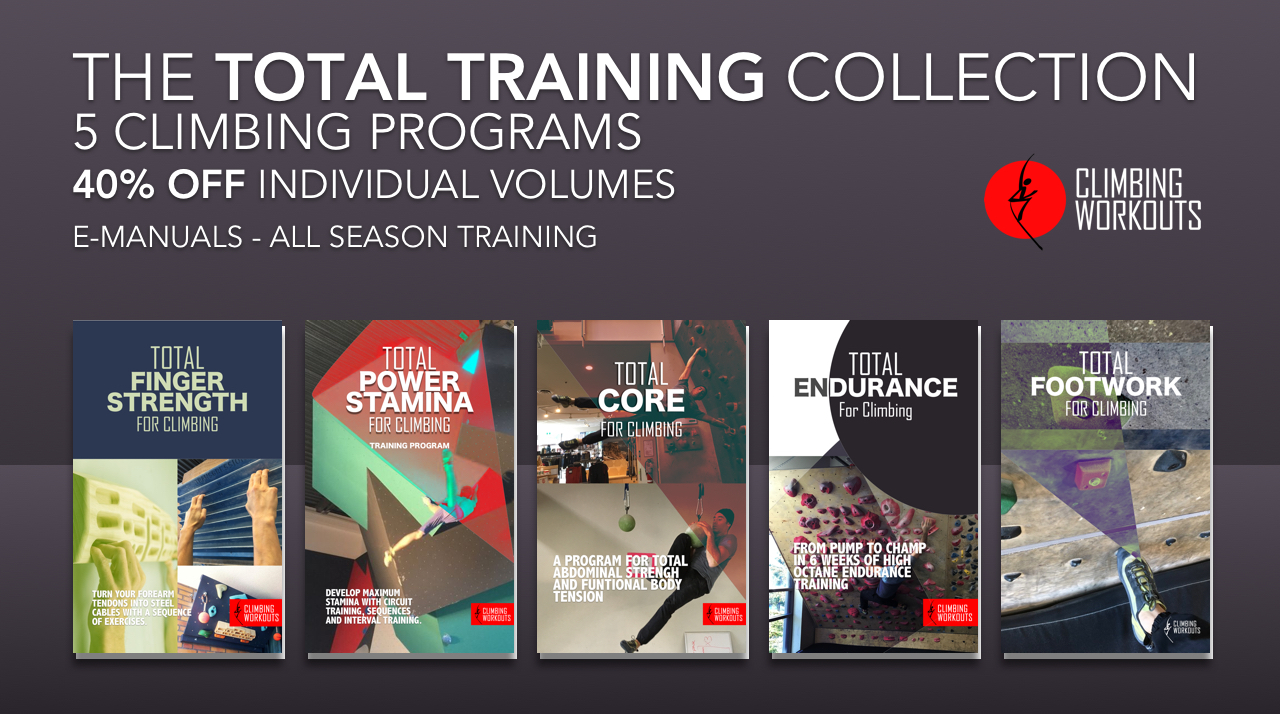 The TOTAL collection changes the landscape of climbing conditioning and sport performance. This effective training kit presents the latest and most effective philosophies, protocols and programs for developing today's sport climbers.

The premium collection is a selection of effective training E-guidebooks for body movement, technique, strength, power and endurance.